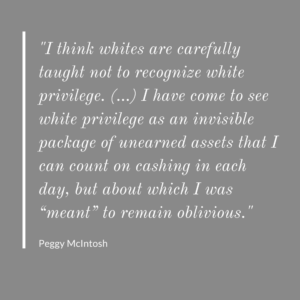 I grew up in a rural part of Germany, which was basically a small racist microcosm within a larger racist society. Racism was an intrinsic part of my upbringing, even though it wasn’t addressed, as such. In school, there was a lot of time dedicated to teaching us that racism was a bad thing, but at the same time, and quite paradoxically, micro aggressions and stereotypes that were used to establish a racist hierarchy were still a common phenomenon we, as children, experienced everywhere: In political discussions, as well as in private conversations.

Undoing our early childhood conditioning is hard work, and it is crucial work.

Even after four years, I don’t think I’m fully there yet. That is how deep this stuff goes. And I’ll keep going.

Quote:
From Peggy McIntosh’s academic paper, “White Privilege: Unpacking the Invisible Knapsack”, 1989 – watch her TEDx talk on “How to recognize your white privilege, and use it to fight inequality”, here. 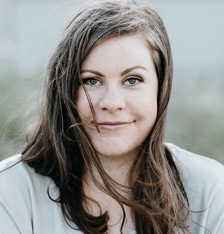 We cannot solve today's problems if we don't combine the brilliance of our analytical minds with the depths of our intuitive wisdom. Your unique Inner Wisdom System holds the clarity you seek – and I can help you tune into it. In my customised Sessions, you and I will also ask your subtle energies and your team of Guides & helping spirits to help us get to the bottom of things. My specialties: Helping you heal your relationship life, your soul life, and the relationship you have with yourself.